This step-by-step tutorial will show you how to use the e-Zyvec vector drawing interface from A to Z in less than 10 minutes. After this, you will be able to draw a lot of vectors really fast. If you have any questions, please contact us at contact@e-zyvec.fr.
I. Create your first vector II. Master the vector drawing III. Submit and manage your projects

In D-Zyvec, all the vectors are grouped in projects. Each user manage its own projects that he can share with his registered colleagues belonging to the same research team.

To be able to start drawing vectors, you must start by creating a new project. Creating a project is pretty straightforward: simply go to "Your projects" and click the "+" button. You are then asked some basic questions about your project in a pop-up window. Once you filled the empty fields, click on the "New project" button: 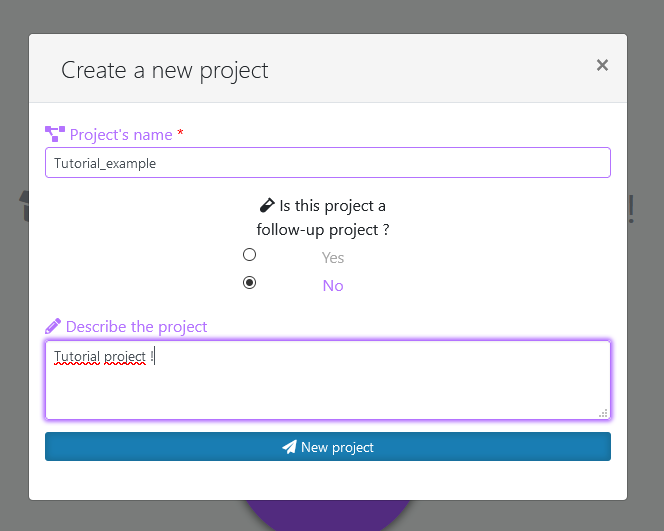 Congratulations ! You just created your first e-Zyvec's project.
Creating a project does not commit you to anything. As long as a project remains unsubmitted we will not issue any quote. However, if you decide to order the vectors you draw by submitting the project to us, the description you provided will be recalled on your specification requirements file. So, the more specific you are the better.
If your project is based on DNA vectors you previously ordered from us, please indicate it here. As a result, any quote requested using the D-Zyvec will be calculated with the discount fee applying to follow up projects.
You are now on the page in which you will design your vectors for this project. This page is made up of two main parts :

The first thing you must do is to give a name to your vector using the purple blinking field in the small pop-up that appeared on your screen. You can also provide here more input about the purpose of this vector within the project. This will help us better understand your needs and possibly share relevant advises at a later stage. Both name and description can be edited later.

Once done, this window will be replaced by the backbone suggestion menu: by filling up a small series of questions, the system will automatically provide you a starting scaffold for your vector, with prefilled genetic features where it applies!
The expression system and the vector type are mandatory fields. You won't be able to save your vector if you don't fill them.
When you finished filling the questions, click on "Suggest me a backbone". 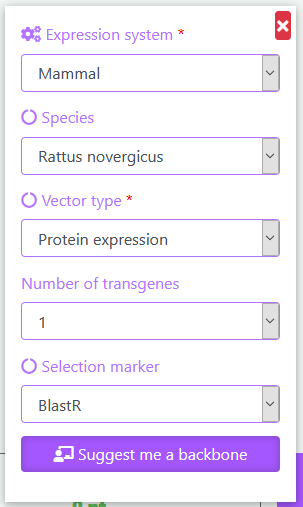 The corresponding genomic features appear on the vector ! 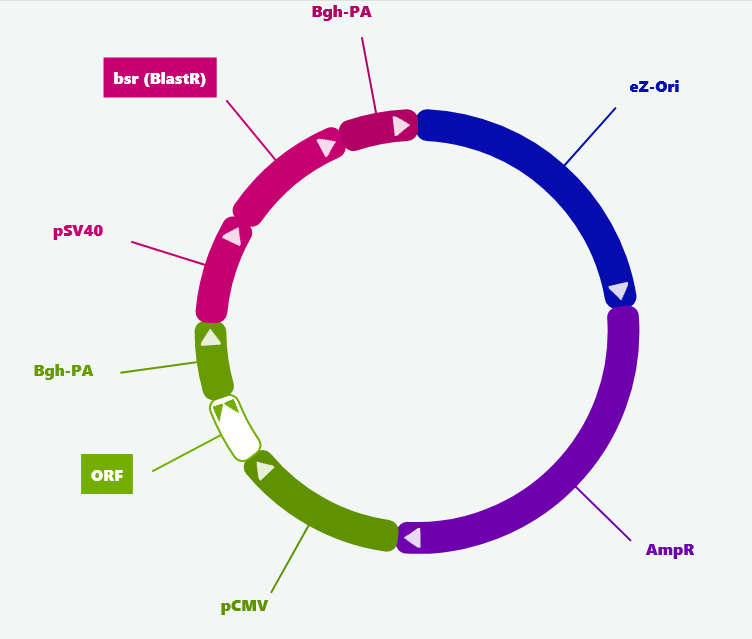 The backbone is only a suggestion. You will be free to change anything you want on your vector : sequences, order, orientation and more !
Now you can save your vector by clicking on

. Your vector ID tag now appears on the project vector list (left of the screen) : 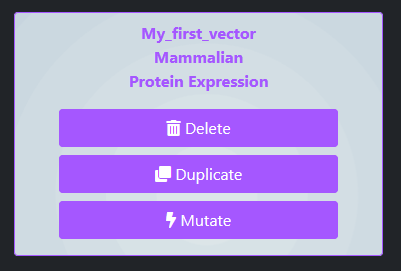 Saving a vector with

will not automatically submit the project and request for a quote. This can only be achieved by clicking on

that will remain below the vectors ID tags, on the left of the screen.
As you can see, there are a couple more buttons you can now use form the vector ID Tag: you can remove your vector, duplicate it and mutate it (we will see the latter in the next part). Now we will duplicate your first vector. Simply click on "duplicate". It created, and automatically saved an exact copy of your original vector. Now you can modify your two vectors separately by clicking on the Tag. Congratulations ! you created your two first vectors. You may leave here without losing any data. Everything is safely saved on our servers. Now we will learn how to entirely customize and manipulate them in the second part of the tutorial.

After doing the first part of the tutorial we obtain the following vector displayed at the right of your screen (or a similar one depending on your backbone choice) :

An e-Zyvec vector is compound of features. Each small block you see on the image corresponds to a feature. Features are regrouped in cassettes that you can manipulate at once. All features belonging to the same cassettes automatically share a shade of the same color. This example is a vector composed of 4 cassettes (blue, purple, green, pink), for a total of 8 features (1 blue, 1purple, 3 green and 3 pink).
A cassette doesn't necessarily corresponds to an expression cassette. The cassettes on the drawing are customizable at will and their only purpose is readability and ease of manipulation. The features are what's matter.

You can entirely modify any feature, even the ones that were suggested in the backbone. Try to hover a feature with your cursor : The feature options appear. The button inside the vector act on the feature : The green transparent arc outside the vector underlines all the features belonging to the same cassette. We will come back to the padlock button later.
Ok but how do I put my own sequences in my vector ? and what's this blank feature ?
The blank features are features for which the system does not have a nucleotidic sequence yet. In case of our backbone example, every feature but the ORF already have a sequence, even though you cannot access it at this stage.

In order to customize a feature, simply click on it. The following window appears on the screen : 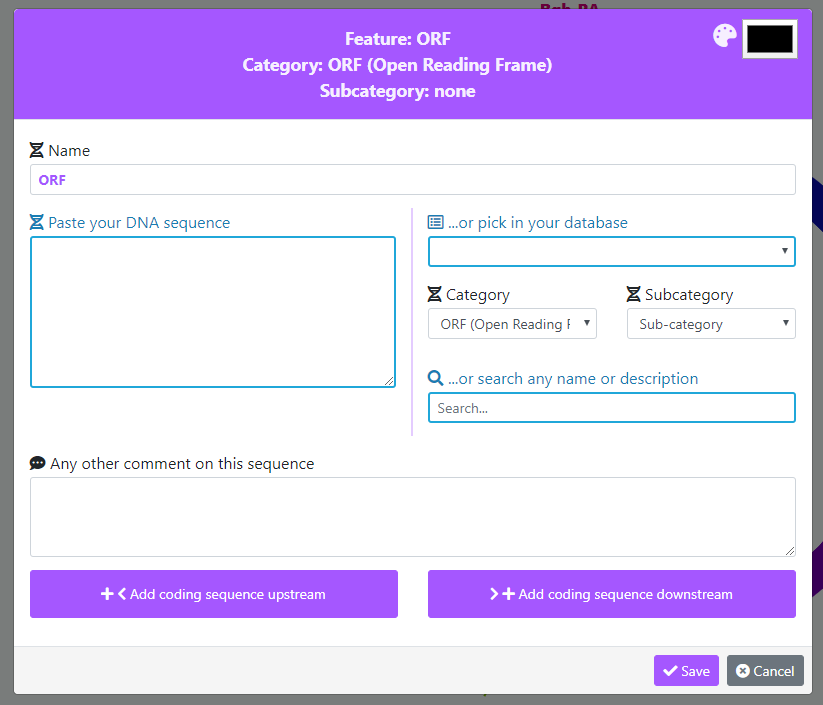 This is the Feature Window. You can either :
Don't forget to save by clicking on the save button below the vector from time to time (ideally after every crucial modification).
Now we will learn how to move a feature. For this, hold your left click on the feature you want to move. You can drag it anywhere on the vector. When you release your click, your feature will drop between the two features that are highlighted in blue : This is it! you know how to manipulate features.
If dropped in the middle of a cassette, the feature will go inside this cassette-unless locked. If dropped between two different cassettes, it will go inside the nearest open cassette, or between the two if both are locked (see below).

Remember the padlock button displayed on the cassette arc?

By clicking on it, you can lock or unlock the cassette depending on its current state.
You can visually differentiate locked and unlocked cassettes by the appearance of the its arc: plain when locked, and hollow when unlocked (or open). In a locked cassette, the two button (rotate and remove) in the center of the vector will now act on the entire cassette. Same goes for the drag'n drop system: If you want to individually manipulate features again, re-click on the padlock. The cassette is now unlocked and you can manipulate features individually !
You can't drop features inside locked cassettes. If you wish to do so, simply unlock the cassette first.

One last thing : we will learn how to add new empty features and cassettes in our vector. At the bottom of the screen you should see these two buttons : 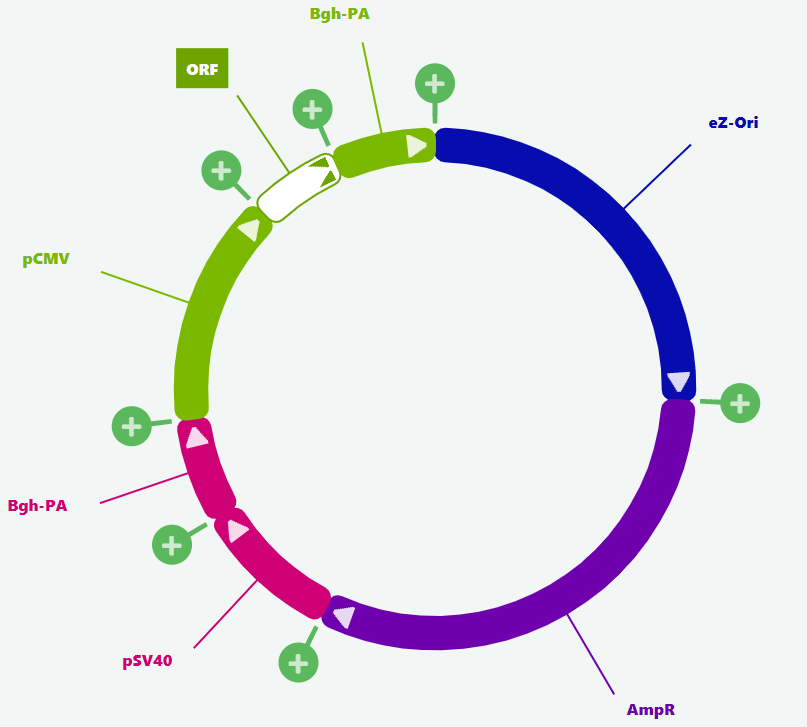 Small "+" buttons appear everywhere you can add a new feature in your vector. Click on the place you want to add your new feature, choose a feature category and that's it ! You just added a new feature in your vector. A new feature will always go in the cassette of the feature preceeding it.
You can't add new features inside locked cassettes.
The blue button works exactly the same but adds an entire preconstructed expression cassette : promoter + ORF + terminator. Congratulations ! you know how to draw vectors on D-Zyvec. Now we will submit the project and talk about project management in the last part of the tutorial.

Not every vectors of your project need to be entirely drawn for project submission. Indeed, many project consists on closely related vectors that will differ only from one to few nucleotides introduced by point mutations, small deletion and truncation of sequences.
In order to create close mutant vectors, click on

on the vector you want to mutate. A pop-up window appears : 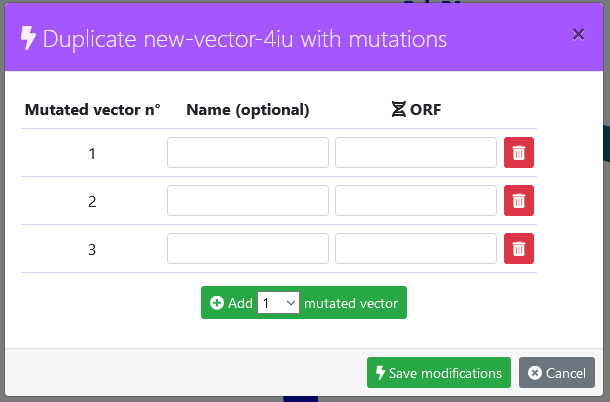 You simply need to fill the desired mutations using one line for each alternate vectors (mutant). This is by typing free text so the more specific you can be the better. You can create as much mutant vectors as you want by clicking on

.
You can only mutate sequences that you pasted in the Feature Window, not sequences coming from e-Zyvec's database.
Once done, click on 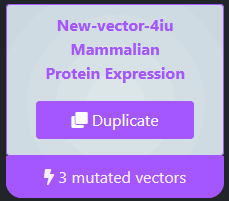 Submit your project: what's next?

Once you finished drawing your vectors, you can submit your project by clicking on

. Your project will be summarized and you will get a price estimation.
Do not forget to define all relevant control vector as well as the production format (required).
You can't edit a submitted project !
A new window opens with a summary of your project as well as an estimate, solely based on what was communicated in this project. If everything sounds good,

Our staff will then review your project and get back to you depending on the following:
We may also try to reach you after reading your submission, to discuss more widely about your project. Indeed, we pride ourselves not to be simple product provider but rather scientific partners contributing to your success. So, we may have a couple of suggestions to pass on you if we think it would help.

Click on "My projects", on the top-right of your screen. You are redirected on the project management page. This is the page where you created your first project. On this page, you can see all the projects you created on D-Zyvec.
You can also see all the projects created by your team members by clicking the checkbox, but only if your account was validated by e-Zyvec's staff.
If you followed the tutorial, you should see only one project on this page : 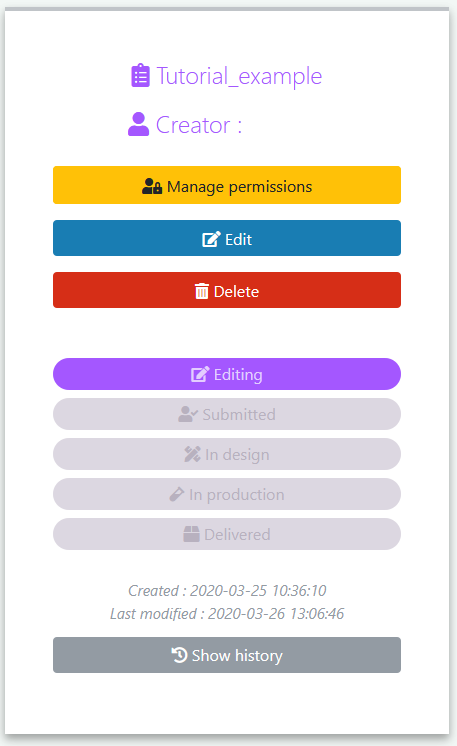 You completed the tutorial. You can start to design your vectors ! create your project here. Any unanswered questions ? check our FAQ or directly contact us : contact@e-zyvec.fr